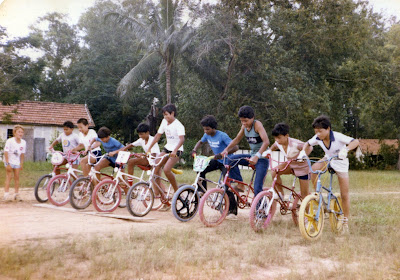 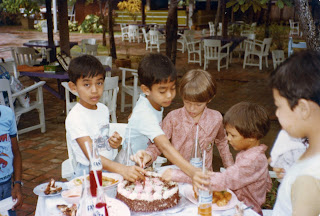 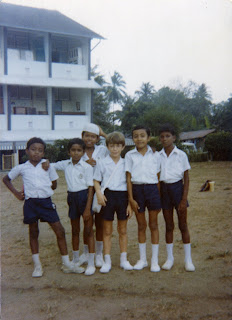 Paul Warner lived in his early years around the Jalan Kayu/Yio Chu Kang area and attended a Singapore government school - Parry Primary. His shares his experience of being the only Caucasian "Ang Mo" amongst his Singaporean classmates in school.

If I was a conspiracy theorist I would be under the impression that sinister forces are at work removing all traces of my childhood!

In the excellent Jalan Kayu trail blog, you mention that Boh Sua Tian Road no longer exists. I remember it well, a long twisting narrow road tunelling its way through a canopy of trees and jungle. Take the road from Jalan Kayu and you could, if you didn’t get lost, exit it at the other end of Yio Chu Kang towards the old Nee Soon.

However, returning to disappearing land marks you can add to the list Jalan Hwi Yoh, located opposite Parry Avenue, across the junction from Yio Chu Kang Road, and Jalan Kayu School which has now been submersed beneath the TPE.

But not everything has gone and my primary school is still in one piece, although the name has changed which is a small price to pay considering what the onslaught of change and development nromally results in.

Parry Primary Days
I remember Parry School before its name-change from Parry Avenue Boys’ School. PABS, Perseverance Always Brings Success, was the school motto. The school song even began with the lines: ‘We students of PABS, shall persevere and do our best ...”

What strikes me most on the few occasions I’ve driven past the school is how the skyline has completely changed. Gone are the jungle, coconut trees and dusty paths leading to isolated kampongs to be replaced by tower block after tower block of HDB apartments. That’s best illustrated in the photograph taken of myself and five of my classmates. They are (from left to right) Isnin, Vela, Khamis, myself, Thalib and Mohan.

Behind the school was Parry Girls which has amalgamated with the boys’ school to become Parry School and beyond that lay woodland and thick scrub, dotted with atap houses and abandoned buildings. I recall on one of our science club expeditions we visited a tow gay (bean sprout) farm where big Chinese jars were used to grow the shoots. All have now disappeared into the mists of time.

Being different and yet the same
So what was it like being a ‘foreigner’ in a local school? Well, as a young child I didn’t know any different and I just saw myself as one in the same as all my classmates. I learnt Malay as my second language, so I did gravitate towards the Malay and Indian pupils. Some of them lived in Jalan Kayu and the school bus would pick them up each morning or afternoon on our way to Parry.

I must have sub-consciously known I looked very different and came from a Western culture by my nick names like ‘Mat Salleh’ and ‘Ang Mo’ which I took in good spirit and never felt offended by. In fact, I am occasionally addressed by those names even today. I remember being starred at a lot more particularly when I ventured on to a HDB estate, but nowadays Westerners are a common sight in these areas with many of them making their homes in government housing.

Games from days gone by...
Fun and games 30 years ago was low tech in the extreme compared with today. No Nintendo or PS3 to keep us entertained during recess or before school started. It was games like police and thief (catching) and in a not so politically correct manner, it was always Chinese boys versus Malay boys.

Other games included kuti kuti (pushing playing cards along the ground and trying to get your card to overlap your opponents) and yeh yeh (a skipping game where the rope was made out of rubber bands).

They were also some curious things we had to do then which would appear slightly bizarre today. For example, on Fridays after recess we would all have to squat in front of our school and brush our teeth, while in the mornings, before class, they were some exercise routines which had to be completed, I guess, to get us physically as well as mentally fit for the day ahead.
We also had regular deliveries of cartons of milk and it was probably the first time I tasted banana and strawberry flavoured ‘white stuff’. There were no photocopiers, so test and exams papers were produced on a hand-cranked stensil machine.

And everyone knows about the national courtesy campaign. Add to that the Use Your Hands Campaign where we all came into school one Saturday and carried out a range of chores like sweeping and pruning hedges.

Jalan Kayu...those were the days
While school life then was very different to what it is now, Jalan Kayu as I remember it has completely been wiped out.

I was in a taxi once and on our way to Jalan Kayu the driver commented it was an area of ‘Indian-control’. And that’s how I remember it. One of the most well-known roads there was Lorong Tanggam where a kampong was located.

There were two bicycle shops, a wet market and even a bakery which did lovely fresh bread. CP Lim's in Holland Road used to have a branch in Jalan Kayu for the airbase clientele. There was also a Chartered Bank and several record shops selling rows and rows of pirated casette tapes for $2.50 or $5.

There was also the 'First to Bata, then to School' shop and many grocery, clothes and electrical shops. A real hub of business activity, but sadly the only shops that remain are located in the concrete buildings (where Thesavi is trading).

Parked up buses and lorries have taken over the empty land where once old wooden shop houses stood.

Thesavi was then located nearer to the airbase before it moved to its present location at the other end of Jalan Kayu. There was also a bus terminus outside the air base and some apartments called Pouldon Court on the left hand side just after you came out of the airbase.

The airbase itself has changed little although when I first moved there I noticed a lot more trees which have gradually been felled over the years.

We used to ride our BMX bikes in a place we called ‘Mud Cave’ just behind Hyde Park Gate . It overlooked the runway and control tower but since 9/11 a fence has been erected and it is no longer possible to venture close to the facility. In fact in those days, you were able to ring a bell to ask for permission to walk, but mainly to cycle, across the runway.

The most exciting thing to ever happen there was when a Vietnamese plan was hijacked and it landed at Seletar. That was in 1978 and I remember dozens of 999 vehicles racing to deal with the emergency. Luckily everything ended peacefully.

I remember the stench from the pig farms which were located further up Jalan Kayu, in the Farmway area, towards Yio Chu Kang Road. When the wind blew in a particular direction we could smell it from our home in Edgware Road.

There were also orchid farms, with a much more tolerable aroma, and even a large pond, opposite the Esso garage.

That area, now known as Fernvale and where Pei Hwa School is located, was completely overgrown and I remember there being rows and rows of rubber trees a bit further on. There were a few families who lived up there and our school bus used to drive up these gravel paths to pick the children up.

I recall there being a mechanics workshop and scrapyard on the corner of Jalan Kayu and Yio Chu Kang. I remember the Seletar market (now closed down and deserted) being opened in about 1975.

Before we moved to Jalan Kayu we lived in Seletar Hills (Jalan Lekub) and I also remember there being a tobacco plantation and I was fascinated by the huge green leaves.

It is amazing how in a space of 30 years a sizeable area has been completely transformed from a rural community to a thriving 21st century metropolis. Only in Singapore!
education Jalan Kayu Jalan Kayu shops and businesses Parry Primary school

Our Team said…
Hi B Tosley,

Are you still residing in Singapore? Do you have any tales from Seletar to tell?:-)

Anonymous said…
Yes, I enjoyed this section very much since it just pours and fills up good ole memories where I studied at PABS (Parry Avenue Boys School also Peserverance Always Brings Success) from 1966 to 1972. Mrs Kang was the principal. Fred was the assistant. My favorite form teacher was Ms Tan. Wonder where these good people are now. Greetings from Chicago, USA
May 29, 2009 at 1:56 AM

Anonymous said…
Paul : I lived at 8 Sussex Garden from 1978 to 1983, and remember playing football with two English brothers who lived at the corner of Sussex & Edgware (north of Edgware, East of Sussex, in the only house that existed there, next to a big field that led to Piccadilly Circus). I think the younger brother's name was Jim or John, who is probably about 39 today.

Does that ring a bell? Do let me know...would be great to catch up!

I lived in Seletar Camp from 1971 - 1980. Studied in Jalan Kayu Primary School from 1972 - 1977, did my secondary in Parry Sec. Played alot of football with Parry boys. Every time I drive on Seletar Expressway, I remembered my footballfield where I learnt the game and I still take a drive into seletar n Jalan Kayu.
March 20, 2011 at 1:07 AM

raj V Reddy said…
I'm just wondering if the small boy in the white t-shirt with red sock is me. Cos I looked like that, skinny n the pair of shoe and my favourite red sock which i always pull half way, till today.
March 20, 2011 at 1:11 AM

Darren said…
Paul Warner,
I remember you and your brother Keith. How are you all getting along? I remember the football matches at seletar airbase and the Chuah's who lived across your road.
April 23, 2012 at 12:29 AM

Anonymous said…
Paul, you are the brother of Keith Warner? Keith was my classmate. I always teased me for his buck tooth. I hope he is well. He might remember his classmate from a head hunter country. 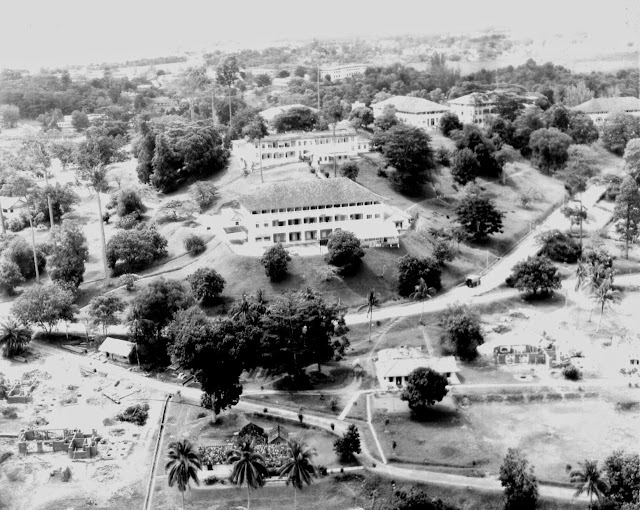 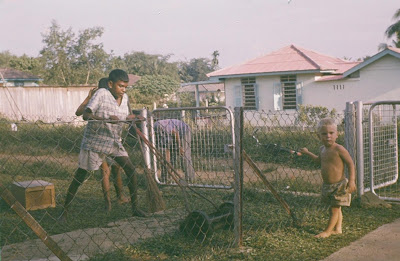 Photo 6 Photo 1 Photo 2 Photo 3 Photo 4 Photo 5 Photos from Cliff Hutton of RAF Seletar. Captions by Cliff Hutton of RAF Seletar Photo 5 My son with their cat "Onion". Note the 'docked' tail. Back in the sixties all cats in Singapore seemed to have "damaged" tails. I was told that it was a Chinese custom to do this as only perfect creatures were admitted to heaven. So cats were treated thus so they'd not displace a human when the time came? Photo 4 RAF Seletar Yacht Club from one of the old flying boat hangars. Note the Austin Mini, one of the first in Singapore.1962? Photo 3 Amah's market Jalan Kayu 1962? Photo 6 Having our grass cut. I think these young Tamil lads simply asked "cutting grass?" Photo 2 Our amah, Foo Kwee Moi. How incredible it seems today that the R.A.F. would pay for us to have a servant! Photo 1 Cliff himself back in the 1960s at Seletar